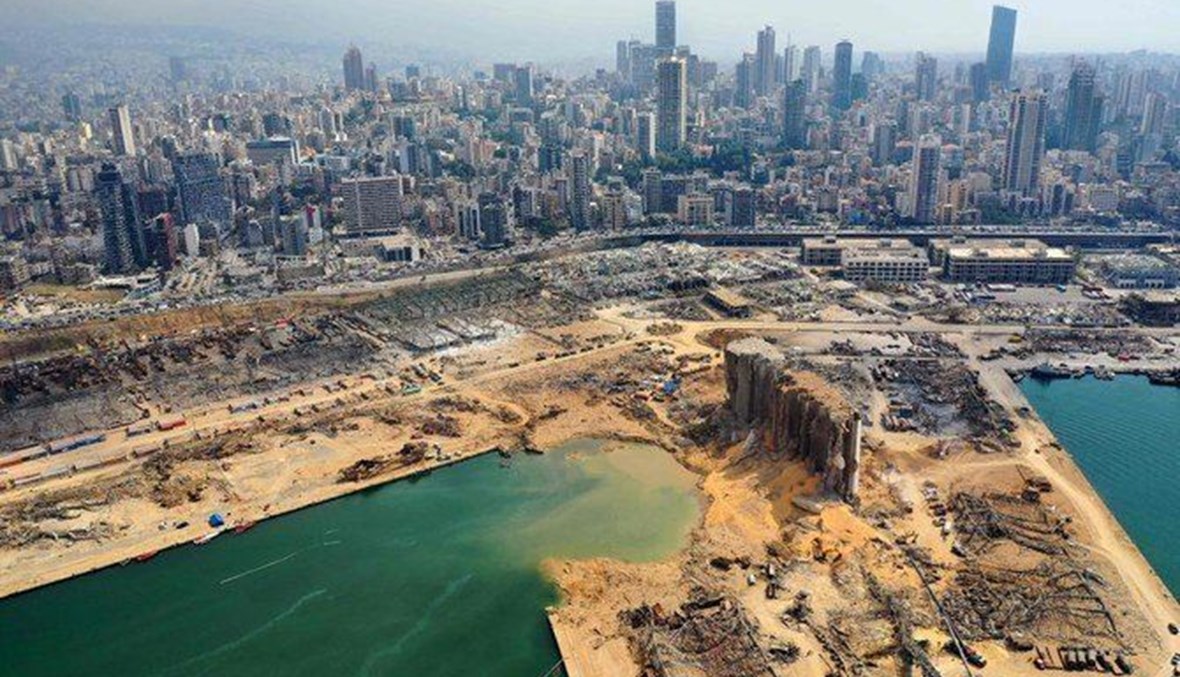 Above, an aerial view taken on August 7, 2020 shows a partial view of the port of Beirut and the crater caused by the explosion. (AFP)

Welcome to issue #4 of “Verse Sanctum”: The Carpe Diem team will dedicate the segment's upcoming issues to encourage everyone affected by the tragic Beirut blast to find psychological sanctuary in written verse. Submissions of either poetry or prose with a word count of 300-400 words will be compiled and shared with readers of Carpe Diem after being reviewed by the team. Through the "Verse Sanctum" initiative, we want to listen to your emotions, and provide for them a safe and welcoming haven.

Ode to the Mad Composer by Assem Bazzi

The matriarchs of my family

As all things do

One missing a leg

One missing an eye

Both still cursed with functioning ears

The Mad composer marches on

To the tune of beer bottles crashing on asphalt

Merrily flailing his arms about to the compositions of his mind

Ushering in the perpetual glass shards that rain on us

Clouds are taunting in the orange blazes of sunsets

Buildings have been ransacked of life

Homes are cathedrals to dead things under the naked sky

I despise the heat

I despise the people who defend the sun

I despise the pharmacist without change

I despise the smiles of those filled with unquestioning certainty

I despise the police, the military, and the boy scouts

I despise the traffic and the car’s broken AC

I detest the news and the talking heads

Holding out her hand to help others

In the midst of the destruction to feed

She runs into my arms

But the weight gets heavy and we both let go

We are all alone

We are all dying alone

While some breath still exists

I will go through the motions as best I can

There is no cure to life

Except in momentary lapses of reason

So if you will excuse me…

I shall be following the Mad Composer

As we both usher in the naked sky with endless bottles.

Assem Bazzi is a Lebanese poet who has been contributing to the Beirut poetry performance scene since the summer of 2011. At the time of the explosion, he found himself in a state of quiet desperation and carried on with his day “bitterly accepting the absurdity of it all.”

After the Dust Has Settled by Racha Mourtada

It’s been over a month, and the blast has sunk into our skin, permeated our pores,

crawled into the corner, an uninvited guest we mindlessly feed our stale grief.

It is a multi-layered thing: the cataclysmic explosion, its searing aftermath, muscle

evoke some semblance of normalcy. It is an efficient executioner: three or four cozily

co-habiting generations felled under each roof, family histories and homes

telescoping and collapsing into the dirt.

It is the residue of thousands of hearts splintered, hundreds of bones broken, dust

we still find in dark corners of rooms we thought the reverberations hadn’t reached.

Fine, powdery glass glinting on the sidewalk, ground into the asphalt by people

desperate to keep up the pretense of going about their lives. It is the indignity of

trees that have bowed down, violently shedding their leaves, disowning summer.

It is the dichotomy, the duality, the unholy mirroring of teenagers dug up from

beneath rubble their classmates scoop up with shiny new shovels. Of wounded

doctors treating the wounded masses. Of teary-eyed residents telling their stories to

under scattered debris, wedding dresses fluttering like white flags of submission. It is

It is the atrocity, the avoidability of it all, the apathy that rings louder in its murderous

indifference than the explosion that decimated half a city. It is the altruism of

strangers, the heroism of neighbors lifting each other up onto broken backs and

shoulders when they have been so brutally let down.

It resonates, the relentless echo of horrors counted and recounted in infinite

patterns, yet everyone looks the same in their grief, their rage, their helplessness,

their stoicism. It revisits, a shadow across each sunset, a breath involuntarily caught

It is one heart, one month on, still beating, faintly flickering under the wreckage, a

testament to a collective spirit that will not be broken.

Racha is the founder of Luqoom, a boutique publishing house for Arabic and English children's books, based in Beirut. Her first collection of flash fiction, “55 Slightly Sinister Stories,” was published earlier this year by Andrews Mcmeel Universal. She was at home with her family at the time of the explosion and they were luckily at the far end of the room when the windows blew out.

Welcome to Carpe Diem, Annahar's new literary section featuring prose and poetry- old and new, published or hidden within the nooks of unveiled pages of Lebanese writers. We welcome all contributions with the caveat that the section hopes to see rawness and authenticity in thought and emotion. Please send inquiries to Carpe Diem’s executive editor [email protected]