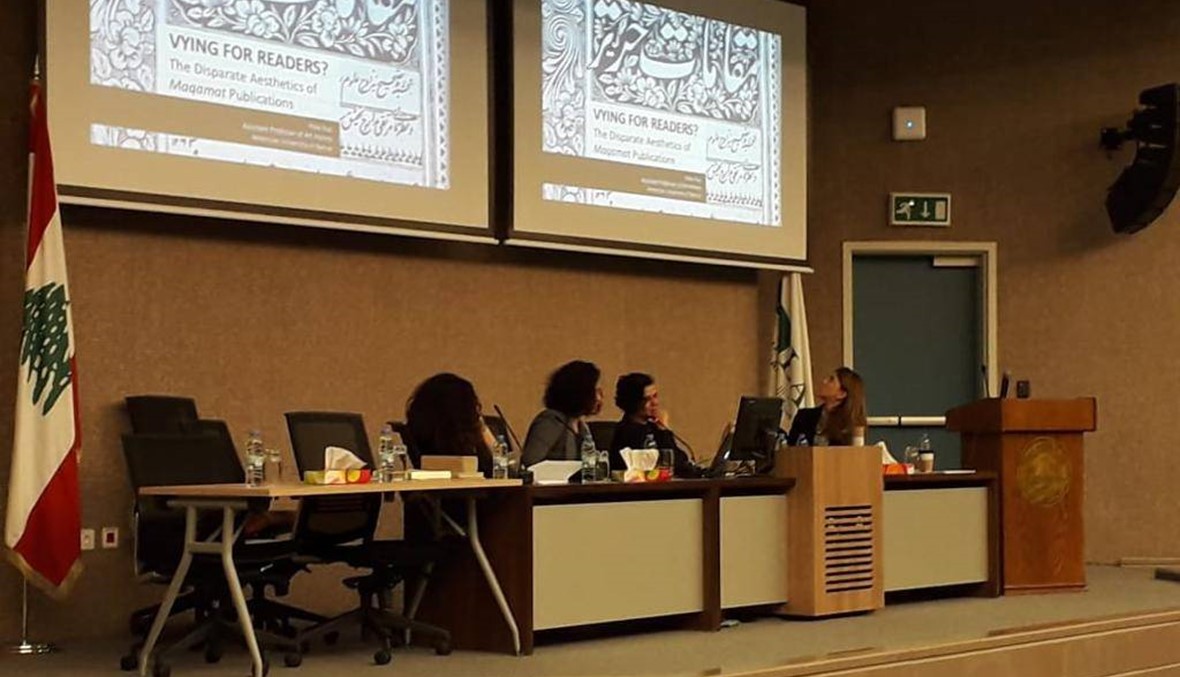 BEIRUT: The Lebanese American University hosted “The Archive: Visual Culture in the Middle East” symposium. Organized by Yasmine Nachabe Taan, Associate Professor of Art and Design, and Melissa Plourde Khoury, Assistant Professor and Associate Chair of the Department of Art and Design, the seminar brought together academics, researchers, designers, and students to discuss different archival methods and viewpoints on graphic design and visual communication of the Middle East, which remains an under-examined field.

The symposium considered several challenges and questions: “How can one write a history of the development of graphic design with the limited archival documents? Is there a particular research method for writing graphic design history in the region?”

It also came in parallel to LAU’s newest design course offering titled “Graphic Design in the Middle East.” The course aims to generate knowledge around the topic, give students an understanding of archiving Arab material, and what it means for artists who work on an archive.

Highly esteemed academics came in from all over the world to discuss their works and the challenges in building an archive for graphic design.

Academics shared case studies from their own research and material that helped in building the first blocks of a record. In addition, they discussed the importance of archiving in two different panel discussion while touching upon the interdisciplinary elements of their works during their presentations and afterwards in the energetic discussions.

The first panel was moderated by Khoury. Panelists included Sonja Mejcher-Atassi, Associate Professor of Arabic and Comparative Literature at the American University of Beirut; Raafat Majzoub, founder and director of The Khan: The Arab Association for Prototyping Cultural Practices; and Paula Roush, founder and creative director of msdm studio. Panelists presented their research alongside their innovative methods in documenting design history and art, all of which are meant to be a work in progress and to redefine what it is to create an archive.

Khoury explained during the discussion that this panel helps students’ question “the notion of the archive as concrete.” Adding that the discussion reveals the fluidity and vagueness in approaching an archive and embracing the uncertainty of going into a project and then transforming it into an archive.

This lead to the second portion of the symposium that was moderated by Taan. Participating speakers examined the process of publishing content and writing on design and the history of publications in the Middle East.

Auji started off by questioning the publishing nature of the 19th century through discussing the history of the Maqamat publications, specifically the aesthetics, throughout the Middle East.

Following Auji, AbiFares discussed the history of Arabic books’ designs from the 19th century leading to modern-day publications within the region.

“In a way, I feel that making books sounds old fashioned. But, it is a nice and concise way to stimulate discussion and discovery,” she said in regard to the decrease of Arabic design content. “This helps to engage with young Arab designers and authors and invites them to do the research themselves.”

Adding, “research is written by non-Arabs, there is nothing wrong with that but there needs to be a voice from the culture that needs to be more critical and open to criticism, which is not done much here.”

The panel concluded with Elmir's presentation on the rise and progress of her publication Portal 9.

It was then noted and agreed that although grassroots movement towards archiving have taken place, there remains a lack of funding that slows down the process. Taan concluded the symposium announcing that such discussions are set to start taking place annually.