The revival of the Arabic language amid the Lebanese revolution 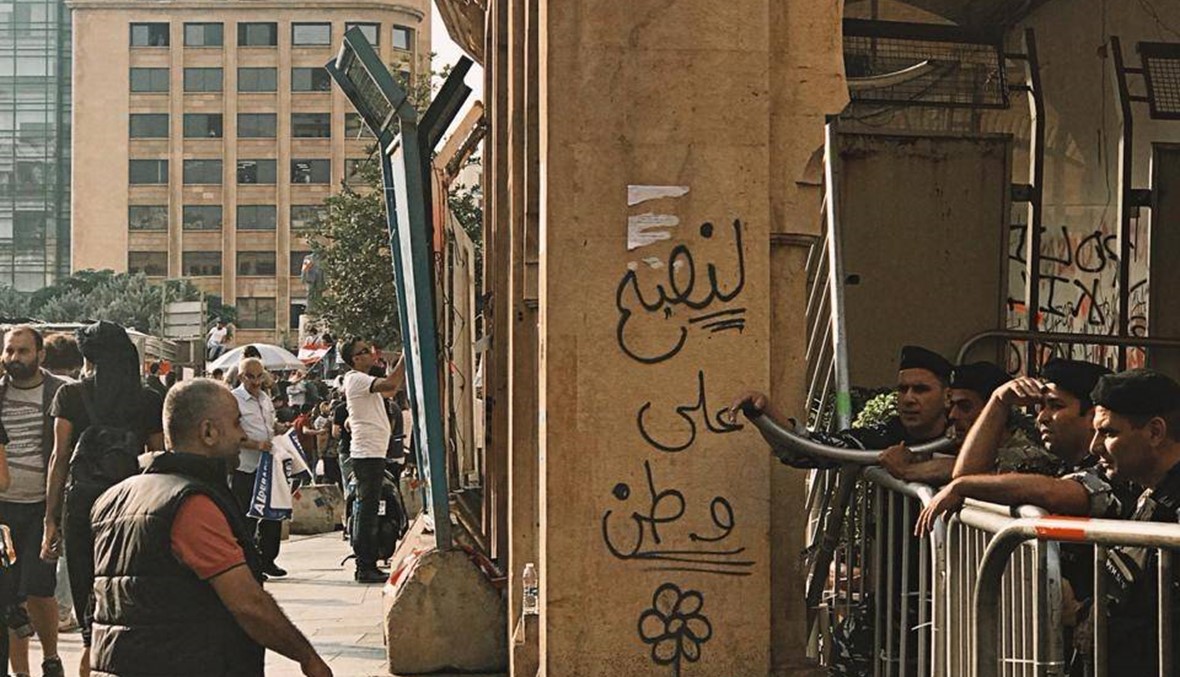 The revival of the Arabic language amid the Lebanese revolution

BEIRUT: One of the most striking aspects of the October Revolution has been the return of Arabic, especially the Lebanese colloquial dialect, to the forefront.

Not only were the revolutionaries united by one flag – an unprecedented phenomenon in a heavily sectarian country – but they were also united by their Arabic tongue and its varied dialects that had been weakened in Lebanon.

Throughout the decades, the Arabic language was rendered frail despite it being native to the Lebanese nation.

“The emergence of globalization and our modern day obsession with social media drew a gap between the Lebanese citizens and their innate tongue,” Vicky Panossian, a literature student, told Annahar. “The multilingual young adult was now considering other alternatives to Arabic and its de facto colloquial dialects, especially those of the Lebanese elite middle class who often try to appear to be francophone and Phoenicians rather than Arabs. The surge of 'hi, kifak? Ça va?' encapsulated this phenomenon, so the necessity for Arabic gradually faded away into the shadows of westernization.”

Linguistically speaking, a prominent feature that distinguishes Arab societies is their ability to compose chants that have a musical essence to them. These chants emanate from an exuberant cultural heritage embedded within a colloquial rural and urban street tongue that unites the nation as a whole.

Some of the revolution’s chants included an Arabized version of iconic songs, such as “Bella Ciao” and an altered one of Bob Azzam’s “Ya Mustapha." Others consisted of emotionally loaded excerpts from patriotic anthems that intertwine with neighboring Arabian cultures, such as Palestine’s “Mawtini” – My Homeland. Moreover, novel songs that glorified the unity of the nation have emerged, only to become popular among protests all across Lebanon; along with the traditional revolutionary songs of Marcel Khalifeh, Ahmad Kaabour, and Khaled El Haber among others.

This phenomenon has also rendered a plethora of social media platforms a safe harbor for raw Arabic slogans, arts, and captions.

Arabic invaded every nook of the digital realm, especially when it came to graphic designs that immortalized iconic moments of the “thawra” – revolution with Arabic features, mainly typography, added to their crux. The language was also distinguished through the use of trendy hashtags that were exclusively written using the Arabic alphabet, such as the renowned “#كلّن_يعني_كلّن” – all of them means all of them and “#لبنان_ينتفض” – Lebanon revolts.

“I’m a regular Twitter user and, for the first time, my timeline was flooded with tweets written in the Arabic alphabet, as opposed to the Latinized Arabic or foreign languages,” George Saba, a protester told Annahar. “It is as though we, as a collective, have finally come together and gone back to our roots by using our own dialect for communication,” he added.

The streets have embraced a crescendo of rebellion that is vivid through the eyes of creative Arabic posters that reek of authenticity. The people also witnessed a flood of expressive graffiti that unbinds the shackles of oppression.

The posters depicted slogans that engulfed sarcastic tones, such as “ماما كيف بيعملو مجدّرة؟” - Mom, how do I prepare a meal of Mjadara?- among the diaspora abroad. Others voiced heart wrenching ones that reflected brutal conditions in the country, such as “شو ذنبي إذا إمّي حبّت أجنبي؟” – How is it my fault that my mother fell in love with a foreigner? - The latter signifies the Lebanese nationality law which prevents women from passing on their citizenship to their children or foreign spouses.

Graffiti played a significant role in perpetuating a resistance for the rights of marginalized factions. It was also a form of reclaiming what belongs to the people, what was stolen from them, such as “هذا البحر لنا” – this sea is ours.

“The use of Arabic in graffiti sprayed all over the walls, especially in Downtown, caught my attention, and the most striking were the ones related to the queer community in Beirut. Signs that say, for example, “عابرات للثّورة” -Trans for the Revolution- have broken the generalized Western mold and put the local language at the forefront,” Saba added.

A salient linguistic feature of the revolution was the alteration of the Lebanese National Anthem. “منبتٌ للنّساء” – they bring forth stalwart women- was added to the anthem by a special Annahar issue dedicated to the women of the revolution. The amended version of the anthem, “منبتٌ للرّجال والنّساء” – they bring forth stalwart men and women - has become the nation’s pride and was performed by many artists, including the singer Carole Samaha.

The Arabic Language is not demised within the arms of the Lebanese revolution, for its remnants remain even after its manifestation transcends.

“It’s a reaffirmation by the people of their public identity, represented by the common language of all the participants. We should not forget that when a society acts instantly, it always reflects its roots, the mother tongue being one of them,” Vahid Behmardi, a Professor of Arabic Language & Literature at the Lebanese American University, noted.

The March towards Beirut

Annahar building: A canvas for BeirutWeLoveYou's...