Nagorno-Karabakh: Second day of battle, ‘God be with our heroes’ Armenians proclaim 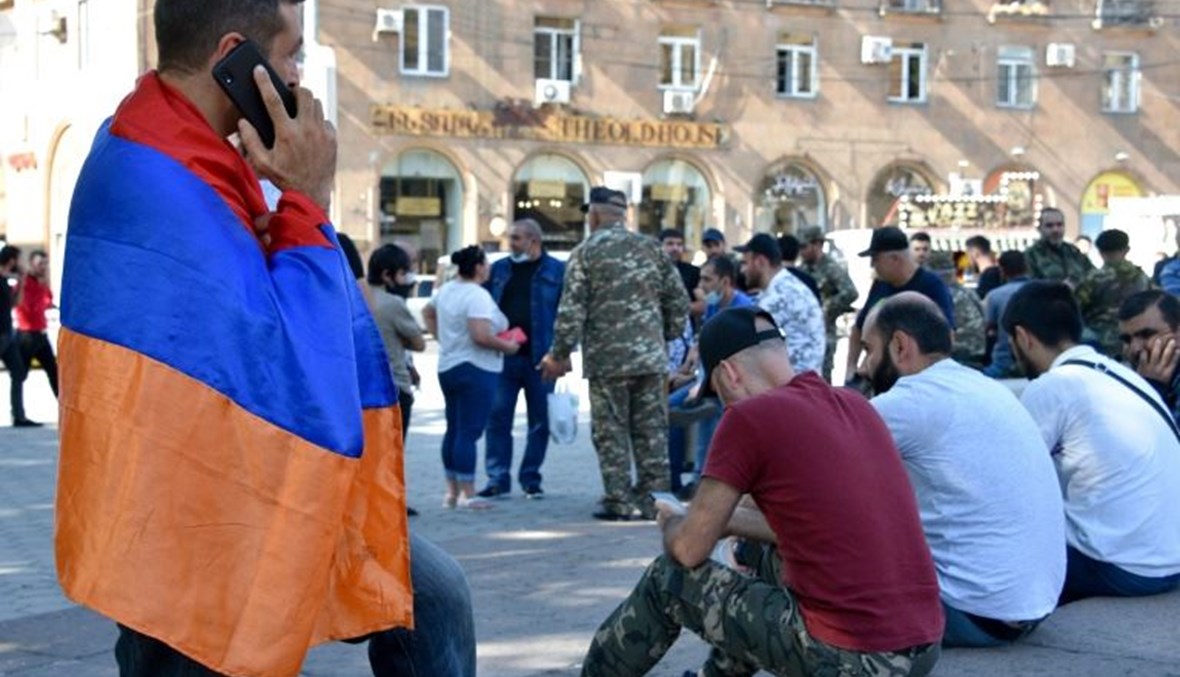 Volunteers and veterans, who are ready to go to the frontline in Nagorno-Karabakh, gather in Yerevan, Armenia, on Sunday. (AFP Photo)

A+ A-
By Perla Kantarjian
YEREVAN: As Azerbaijani forces fiercely reignited the decades-old clash along and around the Armenia-Azerbaijani frontier on Sunday, intense fighting between both forces over the disputed region of Nagorno-Karabakh proceeded well into Monday, with Armenians from all over the country preparing to join their brothers in arms in defending their homeland as the Armenian military death toll reached at least 59.

The de facto independent Nagorno-Karabakh region, home to thousands of ethnic Armenians, broke away from Azerbaijan following the Soviet Union collapse in 1991.

In a breach of the 1994 ceasefire that was reached between Azerbaijan and Armenia to end a bloody yearslong ethnic and territorial war, at least 200 were killed in 2016, and 16 in recent border clashes in July.

The escalation of the Sunday flare-up, however, was the most severe it had been for years, with Azerbaijani forces also attacking civilian settlements including Stepanakert, capital of Nagorno-Karabakh, and Armenia promising a “proportionate response.”

In the words of Anna Naghdalyan to Annahar, this aggression is “preplanned by Azerbaijan,” but with the massive support of Turkey, which has its military presence and which has been showing its aggressive, unilateral support to Azerbaijan and aggressive approach towards Armenia for years.

Naghdalyan, who is the spokesperson for the Ministry of Foreign Affairs of Armenia, told Annahar that “at the heart of the Nagorno-Karabakh conflict is the security of [our] people,” and caring about the safety of the people of Nagorno-Karabakh is of utmost importance, as “they are [our] compatriots who have been firm on the defense of their freedom and their security against this aggression.”

As Ankara professed its “full support” to Baku on Sunday, Armenian Prime Minister Nikol Pashinyan called on global powers to stop Turkey from getting involved in the conflict, warning of the high possibility of the eruption of a “full-scale war” in the South Caucasus.

Armenia condemned Turkey for sending around 4,000 Syrian rebel fighters and Turkish military experts to fight alongside Azerbaijani troops, a report denied by Azerbaijan.

On Monday, however, Reuters disclosed that two Syrian rebel fighters had confessed to being deployed to Azerbaijan in coordination with Ankara.

At the heels of the Sunday hostilities, millions of the Armenian diaspora members from all corners of the world expressed acts of support for their fellow countrymen who are protecting the Nagorno-Karabakh region.

Large numbers of military and medical personnel have also been heading to the disputed region to offer their assistance ever since the clashes began to intensify between Azerbaijani and Armenian troops on Sunday.

Social media has become flooded with pictures of Armenian parents bidding farewell to their sons who have been conscripted into the army, with many fathers and grandfathers even joining them.

Arman Baghdasaryan, an Armenian bus driver from Yerevan, posted a teared-up picture of himself and his soldier son, captioned: “On the frontlines with my boy.”

Other social media posts included videos of Armenian women splashing the departing medical and military vehicles with water, an Armenian tradition that is believed to symbolize a wish for a safe return.

“This is a sad time, and I hope for a quick and peaceful resolution,” said Mr. Petrossian, an Armenian in his thirties who was in a region near the Azerbaijani border when the hostilities had just started.

“A stranger came by and somberly asked if we ‘heard about Artsakh’ and exclaimed that ‘war has started,’’ Petrossian continued, adding that the reality truly “sunk in” when he heard an air horn off in the distance.