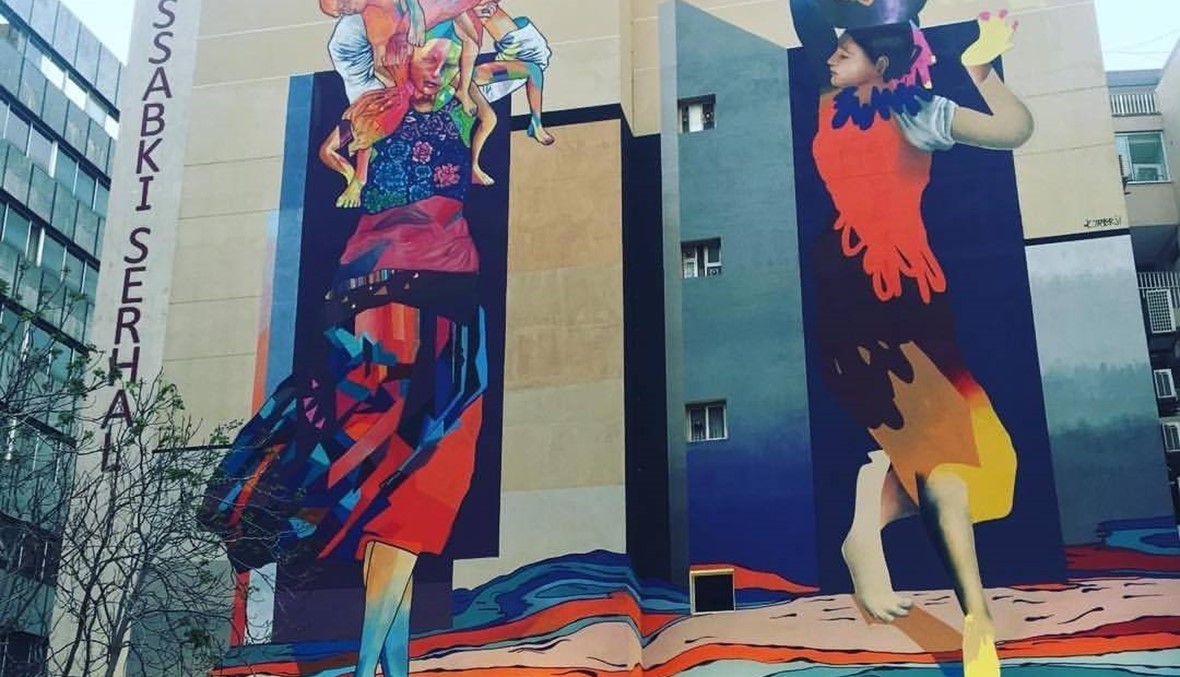 BEIRUT: Last year, Yazan Halwani's "eternal mural of Sabah," added color to the crowded city of Hamra under the support of NGO Ahla Fawda. This year, Art of Change decided to turn another building in Hamra into a colorful canvas of two new murals, adding even more color to an otherwise bland building.

On Thursday, passersby were amazed by the reveal of two-meticulously painted women on the Massabki-Serhal building.

The unveiling of these murals launched the movement of Art of Change, which aims at beautifying the buildings in Hamra by partnering with artists and building owners who understand their mission.

The two new murals were painted by artists Elias Zaarour (Zed40) and Karim Tamerji, and it took them seven days to complete their work.

Moving on, the murals depicted the same woman but in two different representations: one is traditional and the other is contemporary.

On one hand, Zaarour's painting portrayed a traditional woman carrying her child on her shoulders, with her face looking downwards to create the figurative and literal weight of responsibility; on the other hand, Tamerji's painting portrayed that same woman but as a free-spirited modern-day woman who is looking upwards and hoping for a bright future.

Ahla Fawda stand strong in their belief that art is a means of bringing communities together and inspiring change. As a result of their partnership with WhereTheresWalls, Art of Change was born. The latter first started as a project under the umbrella of Ahla Fawda after organizing a festival in Aley two years ago, where the NGO partnered with Rise Gallery UK ot bring international artists to Beirut for them to collaborate with Lebanese artists.

In September 2018, the Lebanese artists who participated in the festival went to the UK and exhibited their talents there.

Ahla Fawda is enlivened by volunteers who strive for community development while employing an artistic and cultural manner of approach. They consider maintaining an overall green ethos a prime objective in their quest to bring joy to local communities by improving their immediate environments.

Iman Assaf, president and founder of Ahla Fawda, told Annahar: "This cultural exchange project impressed and boosted local communities and created overall positive energy, which led to the partnership of Ahla Fawda with WhereTheresWalls, an international consultancy organization, to officially launch the Art of Change movement."

Zaarour and Tamerji have been graffitti artists since 2007, and they make sure with every day that passes that they "observe how art exaggerates truth, encourages a constructive conversation and raises awareness."

Following the unveiling of the two murals, Ahla Fawda hosted an exhibition that showcased other works by the mural artists and a number of other artists whom they have previously collaborated with, like Jad El Khoury, Ghaleb Hawila, and Diana Halabi.

For the founder of Ahla Fawda, Hamra is a symbol of the Lebanese cultural identity. She says: "It has always been the meeting point for artists, poets, and writers. It's a dream of ours to revive the old Hamra. However, our vision and mission encompass Lebanon as a whole, and we will go on with our projects on that basis."

The "Art of Change Show," which also features a selection of artwork from across Europe, will run through May 2019.