Bernard Hage: The mind behind Art of Boo 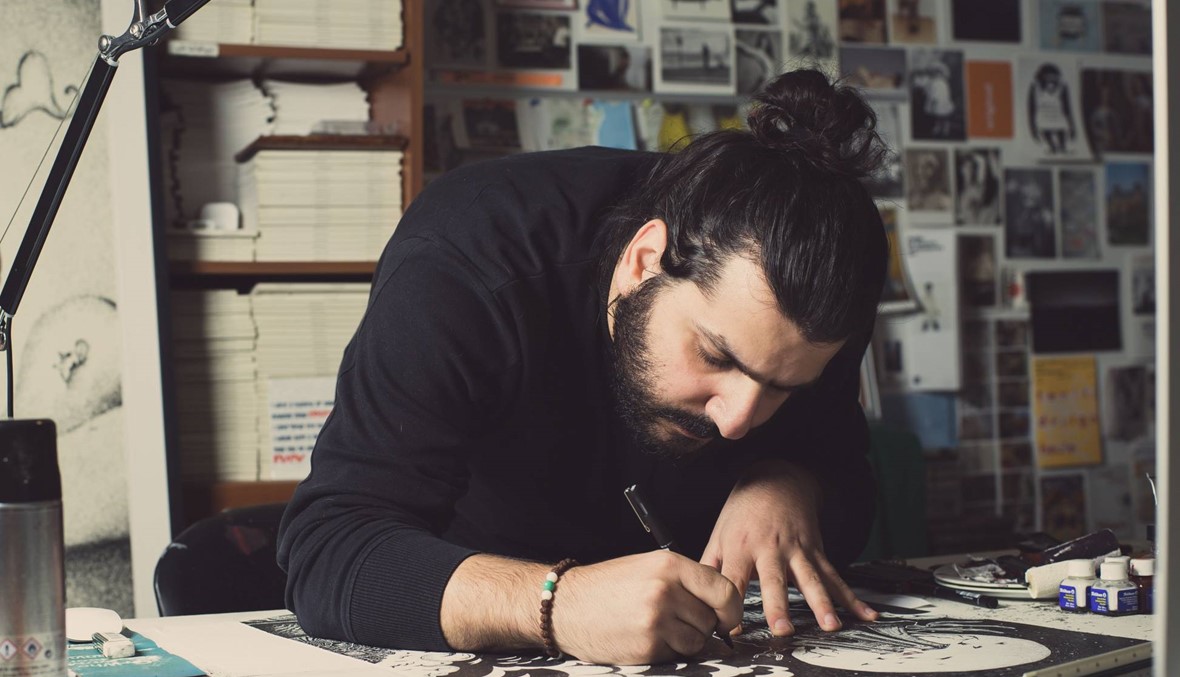 Bernard Hage: The mind behind Art of Boo

BEIRUT: Not unlike other up-and-coming talents, Lebanese artist Bernard Hage first took to pen and paper in the wake of adversity.

Afflicted with the all too common malady of unrequited love, he was egged on by his cinema professor to pen his prose of woes. This created a lifelong habit of documenting tough times which soon flourished into a more artistic mode of self-expression.

Cut to present day, Hage has grown into a Jack of all trades with a career as a comic illustrator, graphic designer, and music composer working under the pen name, Art of Boo. He recently wrote a book of eerie poems that he illustrated and composed a soundtrack for titled In the Dead of Night.

A combination of gleefully morbid and just plain wicked, In the Dead of Night has certainly captured the attention of local readers. “What's especially compelling about his creations,” says local patron, Joline M. Bou Hamdan, “is how he manages to combine darkness and humor in the same storyline.” While introspective and personal, this book seems to speak to many with its universal themes and pathos.

Critical appraises include “I didn’t get it” by Paolo Cohello, “Slightly violent but funny” by Pope Francis, and “Best book you will ever read!” by the author’s mom. Obviously mock reviews written by the author, these scribbles perfectly sum up Bernard’s self-deprecating and self-aware sense of style.

This sort of sinister morose seeps into most of his pieces as illustrated by this excerpt from his poem, Spell.

It was a long time ago

In a town where roses never grow

A lady gave birth to a child

Who was the reason she ever smiled

Then a spooky witch in disguise

Fell in love with the baby’s eyes

But he was too young to feel the same

So she chained his heart to her name

“Come night for you I kneel,

A full moon with angels above.

This child’s heart shall never feel

Or even care or love.”

The boy’s life was full of laughter

And he lived happily ever after.

As far as concepts go, In the Dead of Night was never going to be commercial, given its in-homogeneous nature. It does not yield to any one genre or category, and it’s got a graphic, violent edge that renders it ‘inappropriate’ for the masses.

Despite being saddled with such a hard sell, Hage self published his book through the campaigning efforts of crowd-funding platform, Music Art Design. “His work and overall persona do not fit into one box,” says Rima Yaacoub, COO and Co-founder of MAD, “which is why we selected Hage to be the first artist we host on our platform.”

IT’S NOT FUNNY UNTIL THE PROTAGONIST DIES

In terms of methodology, a lot of comedians play up tragedy for laughs. After all, comedy is in misery, as the saying goes. Drawing heavily from this ideology, Hage optimizes and often exaggerates the therapeutic elements of laughter and jest in his work. “It’s like that Oscar Wild quote,” he says, “people can take the truth if it’s told in a joke.”

The idea is to have the unpleasant realities reflected in the stories and fables in a relatable kind of way while also providing the readers with a valve for their pent-up frustration. “It’s a weird mixture of relevant, reinforcing truths and exaggerated wish fulfillment,” a local fan reports.

His main inspirations were George Carlin, Tom Waits, and Leonard Cohen. “Having come from a French background, I consider them my English teachers as well as my muses,” he tells Annahar.

American comedian George Carlin inspired him with his attitude. The crowned jester redefined comedy with his austere honesty and defiance of audience expectations.

Second on the list but of equal importance, there’s Tom Waits, an American singer-songwriter known for his brazen phrasing and dry delivery. Taken by his use of narrative and humor, Hage consumed Waits’ discography in its entirety which further fueled his own drive to create.

And finally, there’s Canadian poet and musician, Leonard Cohen. This soft-spoken wordsmith had an influence on countless acts ranging from Nirvana, PJ Harvey, Smog, and Bright Eye, to Jeff Buckley. “I wanted to write like him,” Hage says, “because he had a way of illustrating with language.”

NOT BY THE NUMBERS

In the Dead of Night was born through a series of unique circumstances and outlandish novelties. For starters, the composition of the music was done with a complete disregard for conventions. “I didn’t learn how to play instruments in a traditional, systematic way,” Hage recalls, “I kind of approached it with a ‘what does this button do’ frame of mind fiddling with the notes until I got something I liked.”

The same orderly chaos spilled into his workspace taking the form of an obscure desk arrangement that has a built-in piano, an art division, and a writing station.

Wanting to branch out still, Hage ventures to try his hand at cinematography. He is currently working on a stop-motion short film about the unluckiest man in the world titled, Autumn’s Great Beyond. In accordance to some of his online comics, this film is supposed to be a satirical jab at consumerism mentality that really packs a punch.

With an impressive assortment of projects, Hage succeeds at creating an eclectic body of work that offers a little something for almost anyone.